Published in the Blue Mountain Eagle 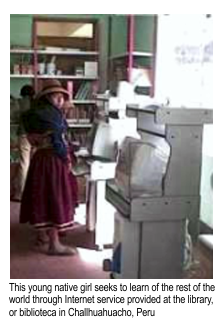 CANYON CITY — Ada Hoffman of Canyon City, a native of Peru, has yearned for several years to improve conditions in her home country, specifically in the remote mountain village where she was raised.

In the past two years, she has made great strides in upgrading educational opportunities for youth in Challhuahuacho (pronounced Chawl-wa- wa-cho), high in the Andes Mountains at an elevation of 12,400 feet. Her heart has been overflowing with so much compassion for this endeavor that it has touched many in our community and beyond.

This young native girl seeks to learn of the rest of the world through Internet service provided at the library, or biblioteca, in Challhuahuacho, Peru. Submitted photo

What was once a dream in Hoffman’s heart has evolved into solid action that has delivered books, educational materials and computers, provided a salary for a librarian and connected Internet service. A library was born.

Instrumental in this accomplishment was support of a network called Quipunet, a nonprofit 501(c)3 organization that includes many U.S. residents, such as Hoffman, who were originally from Peru. Hoffman used contributions from her personal efforts as well as donations to Quipunet to buy necessities for the people of her homeland, with a main focus on youth education.

"Peru is the lowest in education in the world," said Hoffman.

She has been in the forefront with small tokens, such as money gleaned from yard sales, donations of clothing from friends, a few dollars tucked into her hands from acquaintances like Leonard Trafton, and even her personal part-time job at the John Day Elks Lodge, have all helped immensely. Her family’s personally financed trips to Peru have been ongoing. She also said that news articles, such as “A heart for her homeland” published in the Blue Mountain Eagle (Feb. 27, 2002), have helped to spur the government and others to take needed steps to make significant changes.

This spring, the John Day Kiwanis Club adopted the village of Challhuahuacho. With a mission of “serving the children of the world,” the Kiwanis donated $1,000 to the effort, and countless other smaller items for the Peruvian children. With approximately $2,500 more in donations, Hoffman has funded the library project and is making a difference. American dollars exchange to approximately three times the value in Peru. But, even at that, Hoffman is very frugal with her purchases. Most donations were immediately put to work, but she has reserved $400 in the Quipunet account at this time.

During a trip to Peru this summer, Hoffman spent six weeks in her home country. She was joined in late-July for the last three weeks by local Kiwanis member Nancy Nickel, who noted that the needs of Challhuahuacho children fit the Kiwanis mission and the club has agreed to continue supporting the project.

"There is an inalienable right to information," said Nickel. "Poverty should not deny anyone the right to access information."

While on the mission, Hoffman and Nickel began giving the youth useful items such as pencils and other small gifts as rewards for reading, with the hope of increasing literacy of the youth. Hoffman believes education is the key.

She had the good fortune to be educated and attend college in the developed large cities of Cusco and Lima, but she is saddened by the many children who are deprived of that opportunity. Some are required to continue the traditional sheep herding tasks instead of attending school; others never venture to the city as the journey is lengthy and treacherous. The remoteness of the community and lack of infrastructure are major obstacles that prevent connection with the outside world. Hoffman says the area is about 500 years behind the times. The hope is to bring the community "into this century."

The momentum for progress is building and the advancement in Challhuahuacho is used as a positive example.

As the Peruvian government was made aware of the lack of literacy, it was urged to advance its efforts. The library and computers were established in Challhuahuacho by Hoffman, and after an early summer visit from the federal minister of rural communication, he became emphatic that the library be connected to the Internet. In August, Hoffman was invited to the Federal Minister of Rural Communication’s office, where she was interviewed by the national newspaper in Lima. The government indicated that it wants to see more projects like Challhuahuacho implemented, but needs teamwork effort, including government, volunteers and the utilities.

Nickel was present during the interview and she described the process; "The government communications agency OSIPTEL oversees installation and regulation of rural telecommunications, an agency similar to the U.S. Federal Communications Commission. OSIPTEL donated the satellite dish and installation services to connect Challhuahuacho’s computers with the Internet. That ministry hopes to work nationwide with volunteers to bring rural remote communities online and is focusing on and publicizing this monumental advancement."

Biblioteca takes on a life of its own

The establishment of a library was the direct outcome of Hoffman’s efforts. She said it was “a dream come true.” The “biblioteca” is located in Challhuahuacho City Hall, one of the most modern buildings in the area, but modest compared to U.S. standards. Many dwellings and homes are made from sod. Fortunately, 25-year-old Marleni Cruz Protocarrero, a young woman from the community, received a scholarship from Quipunet to finish college and was trained with computers and as a librarian. The program is more likely to succeed since Marleni is from the area and fluent in the native language, Quechua.

"She is like the Pied Piper," said Hoffman of Protocarrero, who caters to the youth’s desire for education and keeps the library accessible during evening hours after the youth have completed their chores and tended the sheep herds. The new library invites after-school, after-work visits. It is a gathering place for youth, where the librarian assists with homework and tutoring is available. It may be more correct to describe the facility as a “learning center,” much more than a simple library with books to lend. In addition, Challhuahuacho is the major gathering place for Sunday Markets, a long-standing activity which opens the community to the outside world, offering hard-to-come-by vegetables and other necessities needed by the nearly 8,000 people of the region.

While not all of the people participate in the library, the response has been very positive. Protocarrero has been over-extending herself to keep the library doors open nearly every day of the week. Therefore, there is a great need to train more library attendants, Hoffman noted. In addition, a young man from the community is being trained as a computer technician, so needed repairs will be able to be done on-site and avoid extended downtime.

At first, there was some resistance from teachers at Challhuahuacho, but now the classes make regular visits to the library for books and access to Internet. A teacher’s meeting held last month in Challhuahuacho included the library as an attraction, which may indicate its growing acceptance.

"The Andeans are ancient and wise people," Nickel said. "They have proven that they can adapt new technologies to enhance their lives without losing their cultural uniqueness."

Internet opens the door to the world

While it may be difficult for many of the youth to physically travel beyond isolation of their homes in the Andes Mountains, through the library and Internet service, they can grow with information about the outside world.

"Internet is the ultimate resource material," said Hoffman. She uses e-mail with Protocarrero to assure that operations are running smoothly and to assist with challenges and to keep abreast of the progress. As the young Peruvians expand their understanding and broaden their outlook, Hoffman believes this opportunity will “open the door for this generation to choose who they will be.” To further the educational impact for Challhuahuacho, Hoffman will accept recent model computers with modems and keyboards, and monetary donations for other supplies and training/hiring/retaining library employees. Donations to Quipunet are tax deductible.

Periodically, Ada and her family — husband Norm and daughters, Ada, Maria and Sabrina, return to Challhuahuacho. Many of Ada’s extended family in Peru are part of this educational project.