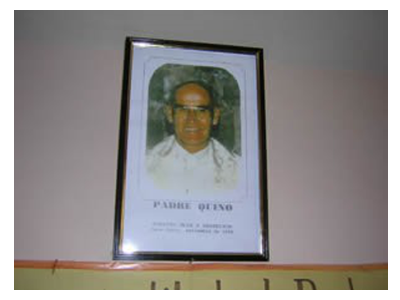 2004 Report on Visit to Manto Parpay

Manto Parpay is a community located in one of the provinces of Cusco, it is one of the annexes of Paruro. This community was one of those that Father Quino helped to have contact with civilization. Father Quino was a priest who lived and worked for many years in the city of Cusco and often came to the most remote communities on foot with the desire to help them and bring development to them.

Father Quino was the founder of CASA CUSCO, an organization that helped many communities and had as benefactors, his own family from Spain, friends and other supporters. Unfortunately, several years after he died, CASA CUSCO had to dissolve. 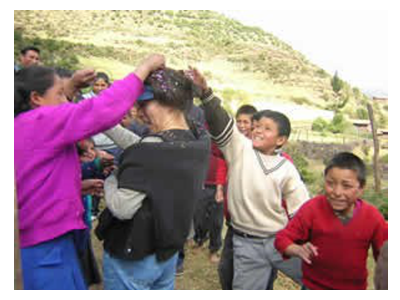 Arriving in Cusco, we contacted the engineer, Pedro Zanabria, (who is the link between Quipunet and Manto Parpay) to tell us how to get there. To our surprise and joy he offered to take us there himself, which we gladly accepted, since we had no idea of how to get to the place.

On June 23, 2004 we got ready very early and when the engineer Zanabria came by to pick us up, we started our journey. Before leaving, we went to buy the sweets, cookies and a bag of “shots” that our friend América Cisneros Piña had asked us to distribute to her children. After acquiring them, we continued on our journey. The truck could only take us to a certain place, from there we had to continue the rest of the trip on foot. After walking for half an hour, approximately 5 km, we arrived at the Manto Parpay community.

There were the children, parents and teachers waiting for us. We were greeted warmly and including with applause, which filled us with excitement. Professor Serafín Arizaca Macedo, director of the Manto Parpay co-ed Educational Center Number 501178, was the one who formally welcomed us on behalf of the community. We moved immediately on to the School Library, which we found in perfect order and cleanliness. The almost-new books were on the shelves along with the other library materials.

Principal Arizaca formally introduced us to the parents who were there, and Mrs. Ada Hoffman speaking, informed them of the reason for our visit. QuipuNet's desire was to get to know each of its projects more closely, to get to know each community and mainly to learn what were the basic needs for each project. 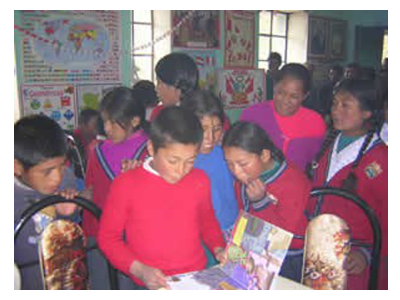 Later, the director Arizaca explained about the operation of the library and how the use of control mechanisms had been established. The library is used by the children, after school, mainly in the afternoon. They are attended by the director Arizaca who divides his duties as director, teacher and is also responsible for the library. Children who cannot read are cared for by teachers. For the rest of the children, from the different grades (1st to 6th), they take turns each week and do reading lessons. It is important to indicate that the student population is about 120 students. He also informed us that the adults use the library in the evenings after finishing their activities in the fields.

After our conversations, we were invited to witness performances prepared by the school children. In it, we could see the youth leadership that has developed in the children, mainly in the youth leader of the school and his two councilors. The performance was magnificent, they offered us songs, poetry and dances performed by different boys and girls eager to participate. After the performances, we took advantage of the moment while all the children were gathered to distribute the sweets that we had brought them. Needless to say, they expressed great joy about it.

Subsequently, the delivery of the computer and printer was made by the engineer Pedro Zanabria, representing the work group that had embraced the school. The details of the equipment delivered can be found in Sales Tickets Nº 005-0036165 and 005-0036169 that engineer Zanabria gave us to give you. 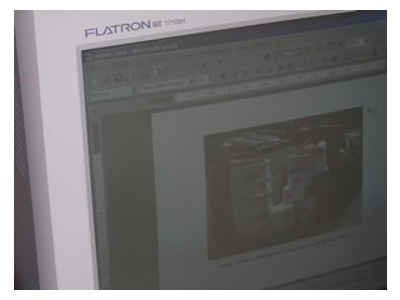 For this presentation, the director, teachers, parents and some students were present, who upon seeing the computers could not hide the emotion that overwhelmed them. The young leaders used the equipment for a few moments to try out some installed programs and encyclopedias. Likewise, we took advantage of the moment and introduced América Cisneros and Daniel Vélez, who are the benefactors. They were happy to meet them, even if it was through a photograph on a computer, and they took note of their names to send them their thanks. For reasons of space and access to the electricity, the computer and printer were installed in a location separate from the library.

Finally, the fully organized parents invited us to taste dishes prepared by them earlier.

It should be noted that we very much enjoyed this experience of the Andean children with youth leadership, with great personal esteem and grateful for the help that was being provided.